Here’s a mystery: Why is workers’ share of total economic output declining? If you think that’s been happening forever or that the answer is obvious, you’d be wrong. On the contrary, through most of the past two centuries of booms, busts, wars, and technological revolution, labor’s share of GDP stayed remarkably constant (around 65% in the U.S.). That finding, when first unearthed decades ago, surprised everyone. British economist John Maynard Keynes called it “a bit of a miracle.” Nonetheless, it looked like a fact of life—workers’ pay grows with GDP.

But then, of course, it didn’t. Starting in the 1980s, around the world, labor’s share began to fall slowly. In 2000, it began to fall quickly. Labor share is now 56% in the U.S., which translates into some $11,000 less in annual income for the average household than with a 65% share. The decline has been even steeper in some countries, notably Germany, and has occurred also in developing economies, including China, India, and Mexico.

So what’s going on? The leading suspect is technology, but the causal relationship isn’t as obvious as it may seem. After all, the tech advances of the 19th century were revolutionary, and they improved living standards dramatically. What has changed in the past 30 years about the relationship between technology and wealth distribution?

Recent research by Daron ­Acemoglu of MIT and Pascual Restrepo of Boston University outlines an eye-opening new way of analyzing technology’s effects on workers. Automation always eliminates jobs, they note, and technology also creates new jobs; machinery displaced a lot of farmworkers in the 19th century but also created millions of new jobs in manufacturing, for example. That may be common knowledge, but comprehensive figures on tasks eliminated and created by technology were not readily available.

So the researchers did some heavy-duty number crunching and found them. “Look at the 40 years after World War II,” says Acemoglu, referring to a period when the labor share was still holding steady. “There was quite a bit of automation [that eliminated tasks] but also quite a bit of introducing new tasks—they were almost identical.” (Think of all the new jobs in services as they became a much larger part of the U.S. economy in the 1950s and 1960s.) “Then the sea change in the last 30 years—automation gets a little faster, but the introduction of new tasks gets very, very slow. That’s the big headline finding.”

It’s also the mystery. The significant implication of this research: For the first time in modern history, automation isn’t necessarily good for workers overall. “Our evidence and conceptual approach” do not support “the presumption that technological change will always and everywhere be favorable to labor,” Acemoglu and Restrepo write. “If the origin of productivity growth in the future continues to be automation, the relative standing of labor will decline.” 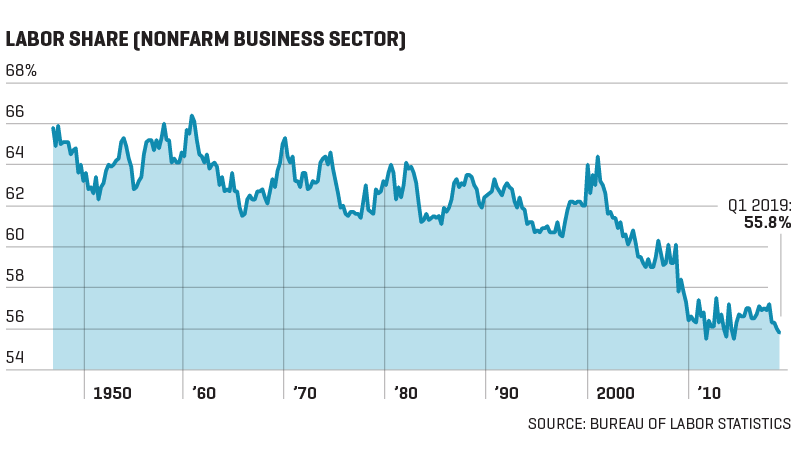 Again, why? For noneconomists observing the world around us, it’s hard not to conclude that the big-picture explanation involves technology’s increasing power—a combination of Moore’s law, advanced algorithms, and universal connectivity, all at ever-falling cost. Maybe tech has crossed some threshold relative to human capabilities. If so, capital wouldn’t augment labor with technology, as it has always done, but sometimes would have an incentive to fully substitute for it. The number of non-automatable jobs, existing or still unimagined, would dwindle. Daniel Susskind of Oxford University has proposed an economic model based on a new type of capital along these lines, “advanced capital,” that is purely labor-displacing. His model leads to a scenario in which “wages decline to zero.”

Virtually no other researcher is ready to go there. But the increasingly mainstream view—that technology can still make workers better off but doesn’t necessarily—reflects a world-changing shift in the way automation affects labor. It requires new assumptions by business and government leaders, investors, and workers. It suggests that voters may demand public policy that controls technology’s effect on workers, since tech can’t be counted on to boost workers’ well-being overall.

In a 2013 lecture, former Treasury Secretary Lawrence Summers said, “This set of developments is going to be the defining economic feature of our era.” That’s looking truer every day. A major societal realignment is in its early stages. Brace for the tumult.