FORTUNE — The approach of tax day reliably cranks up the volume of chatter about America’s screwed-up tax system, inevitably featuring outraged recollections of something about Mitt Romney paying only a 15% rate, and Warren Buffett saying his cleaning lady pays tax at a higher rate than he does.

America’s tax system is indeed screwed up in a thousand ways, but when it comes to progressivity — higher tax rates on higher incomes — the reality might surprise some people. As the chart below shows, America’s income tax system is very progressive. (All data, the most recent available, are for tax year 2011.) Those with low incomes actually pay a negative rate on average, receiving money through “refundable” tax credits, meaning credits such as the Earned Income Credit that are paid to filers even when they don’t owe any tax. 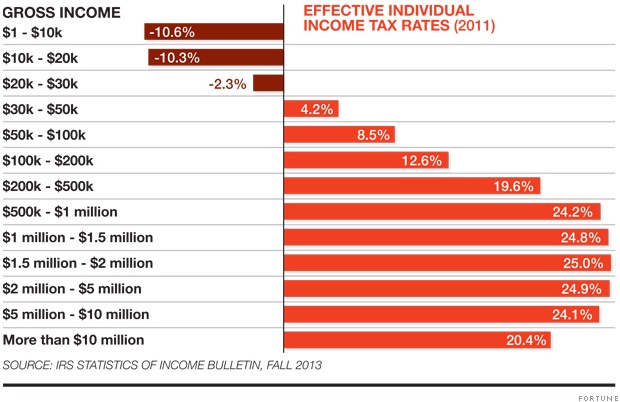 So for Americans covered by 99.99% of all tax returns filed in 2011, the income tax system is progressive — those with higher incomes pay higher rates. Of course that won’t necessarily be true of every person; with over 145 million returns filed, anomalies are certain. But the big picture is clear.

Still, you can see what happens when incomes climb above $5 million: Effective tax rates go down. The system becomes regressive. Is that a problem? You could certainly argue that it is, although it would be a fairly minor one, for Americans covered by 99.4% of all tax returns still pay, on average, an effective tax rate lower than the 20.4% rate paid by the very highest earners, those with incomes of $10 million or more. In addition, it appears that many of those in that highest group are different from year to year; IRS data suggest that many of the taxpayers in that group are there because they’ve realized a huge capital gain — selling a business or block of stock, for example — and then don’t see that kind of money again for a long time, maybe ever. The capital gain of course accounts for the lower tax rate.

Some people argue that in judging fairness we must look also at Social Security and Medicare taxes, which take a bigger chunk from the incomes of low earners than from high earners. But those taxes are collected separately for a reason; they’re specific programs into which people pay early in their careers and from which they receive benefits later. If we want to make those programs fairer — and we must — we should lean on the rich by means-testing them and lowering their benefits accordingly.

So by all means get outraged about our individual income tax system — about the insane, sacred-cow loopholes that distort incentives, like tax-free employer-provided health insurance and (dare I say it?) the mortgage interest deduction.

But when it comes to progressivity, give your blood pressure a break.