FORTUNE — Here’s a test of whether Pricing the Future might appeal to you: Does the series 1.41, 1.73, 2 make your pulse race? If so, you’re in for a treat, for reasons that will be explained. If not — well, so long as you appreciate the monumental importance of the Black-Scholes option pricing formula, you could still find this story fascinating. Who would imagine that a financial equation could have a life story involving pollen, a forgotten French mathematician, Einstein, and multiple Nobel Prizes?

But then this is one heck of an equation. The Black-Scholes finding made possible the multi-trillion-dollar market in derivatives, the “weapons of financial mass destruction” that Warren Buffett warned of and that played a major role in our brush with financial Armageddon three years ago. The equation was at the foundation of our last previous system-wide crisis, sparked by Long Term Capital Management’s collapse in 1998. It wouldn’t be correct to say the formula caused those cataclysms, though — it did not. It’s the basis of the enormously beneficial market in put and call options used by farmers, airlines, and others to stabilize their businesses. It’s enshrined in SEC rules as a tool companies can use in reporting the value of stock options paid to employees. It is the original ancestor, the Adam and Eve, of all the quants on Wall Street. Black-Scholes has shaped our economic lives, even if most people don’t know it.

The formula, published in 1973, solves a problem that had been around for thousands of years and that people had been trying rigorously to solve for decades. The problem: What is an option worth? Owning the right (with no obligation) to buy or sell something at a stated price on a stated date in the future is obviously worth something, but how on earth can you decide how much? Without an answer — or at least some idea of which factors count and which don’t — most people wouldn’t have enough confidence to use options. 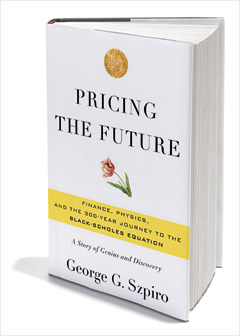 Finding the answer begins with understanding stock price movements, an inquiry that goes back much farther than you think, as author George G. Szpiro explains. A French investor named Jules Regnault published a remarkably insightful study of the markets in 1863. Using 37 years of data from the French bourse, he analyzed how stock prices deviated from their average over varying time periods. He found that when the period is doubled, the deviations increase by a factor of about 1.41; when tripled, by about 1.73; when quadrupled, by about 2.

This is where your heart rate increases or doesn’t. It does if you realize that 1.41, 1.73, and 2 are the square roots of two, three, and four (and if you don’t, Szpiro helpfully points it out). That is, the variations of stock prices increase by the square root of the time being examined. Regnault was thunderstruck. As he wrote, “The variations of the stock exchange are subject to mathematical laws!”

In fact they’re subject to a law that’s far more important than Regnault knew. Stock prices are only one example of random zigzag movement that puzzled scientists for decades before and after Regnault. It’s known as Brownian motion, after the Scottish botanist who observed through a microscope that grains of pollen in water seem to vibrate. So does rock dust, charcoal, and all kinds of other stuff. What’s going on?

Physicists, chemists, mathematicians, and others kept coming up with the same result: The distance these lurching particles travel from their starting point, on average, varies by the square root of the time examined. Einstein proposed that if matter is made of atoms — only a hypothesis when he wrote in 1905 — then particles in fluid are being battered by molecular motion and should follow the square-root-of-time law, which he had never heard of; he derived it on his own. Researchers later confirmed that it worked not just with particles but also with albatrosses flying randomly around looking for food and with mosquitoes flying randomly around spreading malaria.

What had any of this to do with option pricing? Five years before Einstein, in 1900, a French math student named Louis Bachelier had written his PhD thesis on the stock market. He had independently derived — guess what — the square-root-of-time law. Then he went a step beyond by using it in a rigorous mathematical analysis of options. He didn’t get all the way to the formula, but he established the crucial link between option prices and Brownian motion. His thesis was given high marks — and then forgotten for over 50 years.

Paul Samuelson, while a star professor at MIT, discovered it and realized its importance. He began thinking about how to value options. It was a natural subject for three brilliant researchers drawn to MIT in part by Samuelson’s eminence. To compress the story drastically, Fischer Black, Myron Scholes, and Robert C. Merton attacked the problem off and on for years, and finally cracked it. Black and Scholes published the result — one of the most important papers in the history of finance — in May 1973.

The formula is groundbreaking because it’s utterly counterintuitive. In valuing an option to buy a stock, for example, the expected performance of the stock is irrelevant. So is the purchaser’s degree of risk aversion. But the stock’s volatility makes a big difference. The financial world was forever changed.

For their achievement, Merton and Scholes won the Nobel Prize in economics in 1997; Black would have won also if he hadn’t died (throat cancer) two years earlier. The well-known epilogue is that by then Merton and Scholes had become co-founders of Long Term Capital Management, which collapsed spectacularly the following year. But as noted, that was the fault not of the equation but rather of its unwise application.

There’s much more to the story — I haven’t mentioned artillery shells, the sealed letter, or Marie Curie — and it’s engagingly told. It sometimes wanders down blind alleys, but they’re interesting alleys.

Besides, you wouldn’t read this book to make money. It has absolutely no practical value; if you’re thinking it might help you get rich, forget it. But if you understand the importance of Black-Scholes, then this “story of genius and discovery,” as Pricing the Future’s cover accurately describes it, may grip you — even if you don’t get palpitations from square roots.