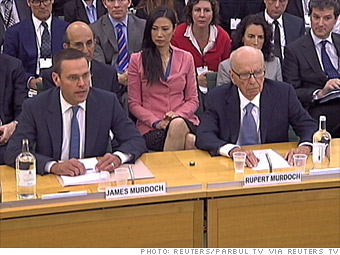 FORTUNE — Some people aren’t at all surprised by the unending scandal at Rupert Murdoch’s News Corp. They are the investors, insurers, lawyers, and others who had read the “Governance Analysis” report on the company from The Corporate Library, a research firm. The firm grades companies’ governance from A to F, and for the past six years News Corp. has received an F — “only because there is no lower grade,” says Nell Minow, who co-founded The Corporate Library in 1999 on the premise that governance “can be rated like bonds, from triple-A to junk.” News Corp.’s overall risk, says the prophetic report: “very high.” Risk of class-action securities litigation: “very high.” Scandal-related lawsuits are already piling up.

For those who think corporate governance is the concern of prissy do-gooders who don’t understand real-world business, News Corp. (NWS) is the latest example that the truth is just the opposite: Governance is the foundation of real-world business. If it isn’t solid, trouble is inevitable. For News Corp., it’s the reason the trouble is far from over.

News Corp.’s variety of lousy governance is simple — one man exerts control wildly out of proportion to his stake in the business. As at many companies with bad governance, the mechanism is dual-class stock. News Corp.’s class A shares account for about 70% of the company’s market cap (recently $41 billion total) but have no voting power. Only class B shares, which account for the other 30% of the market cap, get to vote, and Rupert Murdoch has almost 40% of the class B shares. Economically he owns just 12% of the company, but he wields total control because he can elect all the directors. While the other class B shareholders (about 1,300 of them) could in theory gang up on him and vote against his wishes, in practice that doesn’t happen. It’s especially unlikely since long-time Murdoch supporter Prince Alwaleed bin Talal of Saudi Arabia owns 7% of the class B shares.

Ultimate responsibility for protecting News Corp.’s 48,000 total shareholders thus rests with a board comprising three directors named Murdoch (Rupert plus sons James and Lachlan; daughter Elisabeth is scheduled to  join next year), four additional News Corp. employees (COO Chase Carey, CFO David DeVoe, executive VP Joel Klein, and senior adviser Arthur Siskind), two former News Corp. employees, and seven other directors, including a 31-year-old opera singer, Natalie Bancroft, from the family that owned Dow Jones, which News Corp. bought in 2007. News Corp. says her “youth” and “female perspective” bring value to the board. Under such guardianship, it’s unsurprising the stock has disappointed investors; it has underperformed the S&P 500 over the past five and 10 years.

This board meets the independence requirements of the Sarbanes-Oxley Act and Nasdaq, where the stock trades, but if it doesn’t seem very independent to you, that’s understandable. In any case, it doesn’t matter. While legally the board can fire Rupert Murdoch, practically he can fire the board, and the board knows it. Truly the company has earned its F in governance.

The effects are insidious and more far reaching than you might imagine. “It creates a culture with no accountability,” says Charles Elson, director of the University of Delaware’s John L. Weinberg Center for Corporate Governance. In companies where directors are genuinely subject to the shareholders’ will, CEOs get fired; BP’s (BP) board fired Tony Hayward last year, for example, and Hewlett-Packard’s (HPQ) board fired Mark Hurd. The message cascades down through the organization: Bad behavior gets you fired here. But at companies where the CEO can fire the board, a different message cascades down: We don’t answer to the shareholders, we answer to just one person. It’s the rule of man, not the rule of law.

To see the results, consider the most infamous scandal companies of the past several years – Enron, Worldcom, Healthsouth, Adelphia, Parmalat. Like News Corp., each had risen from nothing to huge success under one man, and through various means he had maintained total effective control. Employees felt they were beholden to a person who was beyond outside governance. The results were devastating to shareholders, employees, customers, suppliers, and communities.

Based only on what has been confirmed, the scandal’s potential damage to News Corp. is already considerable, beyond the closure of the highly profitable News of the World. Confiscated notebooks name thousands of people whose phones may have been hacked — a staggering docket of lawsuits if hacking is confirmed. Payments to police officers, which, News Corp. has admitted, seems a clear violation of the U.S. Foreign Corrupt Practices Act, as several senators have observed. If News Corp. is guilty, the FCC licenses of its 27 U.S. television stations could be in peril. That’s not a theoretical danger; RKO General had to give up all its broadcast licenses some 20 years ago after it was found to have bribed foreign officials and committed other unsavory acts.

A large question for News Corp. now is how much further the scandal will extend. Company officials first maintained it ended with one rogue reporter at The News of the World. Then they acknowledged it was several but involved only phone hacking and only at that paper. Then the scandal spread to the Sun and to police bribery. With 10 employees or former employees arrested so far, it would seem foolish to assume now that all other employees have been behaving like Boy Scouts.

With that in mind, recent events cast a new light on the company’s News America Marketing Group, which produces free-standing ad inserts for newspapers and magazines and for years has been sued by competitors alleging grossly unfair practices. One of the suits went to trial in 2009; after two days of proceedings, News Corp. settled out of court for the stunning sum of $500 million. Another suit went to trial earlier this year, and after one day, News Corp. settled for $125 million.

Now, investigators in at least three countries — the U.K., the U.S., and Australia — are combing carefully and widely through the company’s affairs. What they might find seems to worry investors, who have clipped News Corp.’s market value by $6.6 billion since the scandal broke in early July, reflecting far more than the immediate economic damage. For example, if the FBI finds that News Corp. employees hacked the phones of 9/11 victims or their families, the American public’s fury will know no bounds. That could be bad news for Murdoch’s treasured Wall Street Journal plus his U.S. movie studios (Twentieth Century Fox and others), U.S. cable networks (Fox News, FX, and others), and U.S. TV stations and broadcast network (Fox), which together earn most of News Corp.’s profit.

What’s next? Suddenly under intense scrutiny and in the crosshairs of lawsuits, the directors may remember they have a legal duty to represent the interests of all shareholders (See also: What’s next for Murdoch?). They could finally defy Murdoch, firing him or kicking him upstairs to non-executive chairman or otherwise rehabbing the company’s tattered governance. With the world watching, Murdoch may feel that the one time he needs to exercise his power to fire the directors, he can’t. Or, since the class B voting shares are publicly (though thinly) traded, someone could mount an old-fashioned proxy fight to reform the board.

Murdoch has long argued that News Corp.’s governance is public information, and investors who don’t like it needn’t buy the stock. That’s obviously true and perhaps explains why sophisticated institutional investors don’t buy shares of companies with dual-class stock nearly as heavily as they invest in the overall market, according to research. News Corp.’s shareholders, says Charles Elson, “have no one to blame but themselves for buying this stock.”

The scandal is further evidence that governance disasters are like earthquakes: You can never predict when they’ll happen, but you can predict pretty confidently where they’ll happen. The trembling under News Corp. has only begun.